A fair bit has happened since I wrote the previous update and of course the big news in general terms has been the relaxation of lockdown measures from the British Government.

In terms of impact on activities at the Centre, we have of course been completely closed for a number of weeks with only basic maintenance and security tasks taking place, however, in accordance with the general relaxation on lockdown and travel the Centre re-opened to season ticket access in early July.

The second phase of opening has been a return to self-contained camping along with some low key/low number events.

In line with the overall cautious approach the final phase of the move towards “normal” operations has been a return to day ticket flying and access to the various indoor spaces from the 3rd of August.

Unfortunately a significant number of events at the National Centre have been lost to the pandemic, however, we are working to salvage as many as we can for the remainder of the year (again in accordance with a fairly cautious approach). 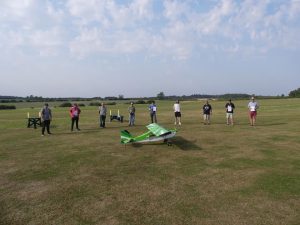 Despite the above there has actually been a fair amount of activity taking place at the Centre, both flying and also from the volunteer team (all appropriately social distanced of course).

We have recently held some limited flying events and a couple of club “away day” bookings, all less than 30 people on site, there have also been a couple of competitions with IMAC (International Miniature Aerobatics Club) holding a round of their tour series and also a round of pylon racing (E2K electric and C32 i.c.).

More recently (weekend just gone 8th/9th) we hosted an Achievement Scheme Review Committee Fly-in weekend which was very successful and saw a good number of visitors working towards and taking various BMFA Achievements as well as plenty of sport flying.

On the same weekend we held the inaugural tethered car meeting which was very successful and it was great to see the track in use after the dedicated hard work that the team have put into the project.

Both events attracted a significant number of attendees and as such we carried out a full risk assessment in order to comply with the “Covid Secure” status and implemented the required measures such as sanitizing stations, regular cleaning and booking in of all attendees for the purpose of track and trace if required, overall it was great to see the site busy but with everyone abiding by the protocols of social distancing, a very successful weekend at the Centre in the “new now”.

The volunteer team have as always been working hard and the site is looking fantastic, they are back on top of the grass cutting and despite the very variable weather the grass is looking in good order (if a little crispy at the moment, the forecast storms should address that).

The team are also returning to some of the project work that we were forced to abandon during lockdown, work to the shower block has recommenced but it will be either much later in the year or perhaps early next year before it will be completely finished and ready for use.

We have also fitted a rather fetching new flagpole and flag to replace the temporary fitment that has been in place since we opened three years ago.

The hay crop has now been cut which really tidies the site up, and of course generates a small additional income.

From the 3rd of August we will be returning to normal operations at the Centre and will be moving away from the “special measures” implemented during the lockdown period.

This means that the normal site rules, operating practices, schedules and timings revert to those provided on the website and directly to all season ticket holders.

As always the important advice is to check the website status before travelling and if in any doubt that your chosen activity is supported then call in advance on the direct number (0116 2441091).

We are also looking at ways of improving the site status information in order to better convey which disciplines and activity are supported on each day, this will ultimately be part of a much broader project to review the website .

The coming weeks are set to be fairly busy and not only have we managed to reschedule a small number of events lost to the lockdown period but also there is a significant demand for camping and flying breaks.

As previously described the tethered car track has really moved forward and we are very close to the finished basic track with safety fencing.

The track is now usable and as referred above the very successful first event took place recently, the final aspect of the project will be the provision of a timing hut and associated equipment, as well as the “kick boards” to align the track with the international standards, however this work will be deferred until additional funds from usage and donations become available to cover the associated costs.

Overall it has been an interesting project and the team behind it are to be congratulated on the level of fundraising, the work put into project and the commitment to getting it completed despite facing many challenges along the way, it is certainly a facility to be proud of and represents another reason to visit the Centre.

As we develop the use of the Centre and as each year passes, we learn more about the best way to operate and where the potential pitfalls lay. One item that I am currently working on is an update to the general and flying rules for the Centre, for various reasons this process has been delayed but keep an eye out for updates and a news item when these are available.

One aspect of operations at the Centre that has recently cropped up is our first noise complaint which is unfortunate after 3 years of operation. On the weekend it occurred there were a number of factors involved and noise is rarely a simple matter.

It is of course incumbent on all of us to be aware of the noise implications of model aircraft wherever we fly, noise has increasingly become a social issue and in general terms society has become less tolerant of unnecessary noise which is underpinned by the ease with which a complaint can be made and progressed.

In terms of operations at the Centre I will be reviewing the operational elements where noise is potentially a factor and will be addressing this within the revised rules and guidance.

In the meantime could I ask that visitors consider not only what they fly at the Centre but almost as importantly, how it is flown.

Thank you for your co-operation on this matter.

The rest of the Year

The activity at the National Centre for the remainder of the year of course largely depends on factors outside of our control, however as things stand at the present it looks like being a fairly positive and busy late summer and autumn at the Centre.

In terms of events, we will be able to largely return to the published events calendar with one or two alterations and additions.

Unfortunately, the planned RCM&E Fly-in (12th 13th September) will not be going ahead but on a positive note we have used the date to reschedule the Freestyle Masters competition which was lost to lockdown.

The Jet Modellers Association 3 day Fly-in is set to go ahead on the 25th to 27th of October and again will be run in accordance with the Covid Secure requirements.

Sadly we have taken the decision to cancel the Autumn Swapmeet in October as there is no way to run such a busy and well attended indoor event and remain compliant with the Covid regulations, however, the plan at this time is to go ahead with the SAM35 Autumn Gala on the same weekend (October 17th/18th).

As already referred the important point is to check the site status before travelling.

Well that’s it for this update, overall, very positive at the National Centre despite the trials and problems of the wider world.

My thanks to all those who have continued to support the Centre and welcome to the new season ticket holders that have joined us this year (there are just under 100 in total now).